General Secretary of the United Nations to Vietnam

UN Secretary General Guterres landed at Noi Bai airport in Hanoi capital this afternoon, starting an official visit to Vietnam from October 21 to October 22 at the invitation of President Nguyen Xuan Phuc. 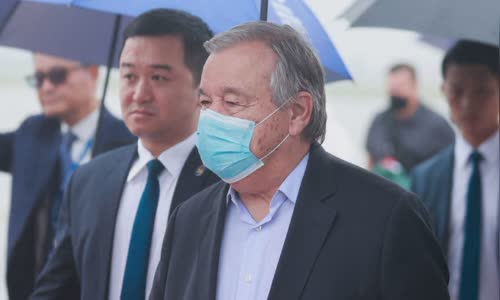 The visit took place in the context of Vietnam to celebrate the 45th anniversary of the United Nations, both successfully fulfilled the role of the non-permanent member of the Security Council for the 2020-2021 term and was elected as a member of the Human Rights Council.

Secretary General Guterres after leaving the plane at Noi Bai airport on the afternoon of October 21.

Vietnam became the 149th member of the United Nations on September 20, 1977 and has since been a reliable, positive and important partner to the organization's mission.

Cooperation between Vietnam and the United Nations is constantly strengthened and strengthened.

Vietnam is one of 14 countries elected by the General Assembly as a member of the UN Human Rights Council for the term 2023-2025 in the vote on October 11.

The UN Secretary General Guterres received Ambassador Dang Hoang Giang in New York and sent congratulations to Vietnam to be elected the Human Rights Council for the term 2023-2025.