NATO is about to transfer weapons against UAV to Ukraine

Secretary General Stoltenberg announced that NATO will provide UAV anti -UAV weapons to Ukraine in the coming days to deal with Russian ambushes.

The most important thing we can do is to do what we have promised, providing more air defense systems, NATO Secretary General Jens Stoltenberg spoke at a security workshop in the German capital of Berlin. 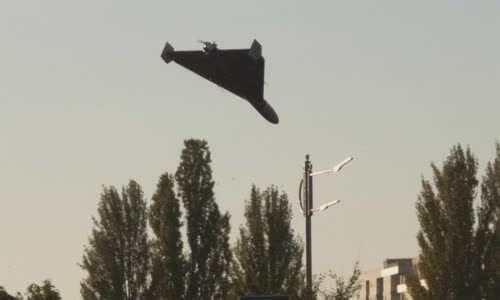 Stoltenberg said that this was NATO's answer after Russia increased the use of unmanned aircraft (UAV) suicide in exciting Ukraine's important energy infrastructure.

NATO leaders did not specify the details of the weapon against UAV but the block was about to be transferred to Ukraine.

Russia's suicide UAV is about to rush to the target in Kiev, Ukraine on October 17.

The statement was made by Stoltenberg after many days of Russia massively raided the energy infrastructure and military command of Ukraine with the UAV killed with missiles.

The debris obtained from the scene showed the words Geran-2 in Russian on the tail of the UAVs participating in the ambush.

The Governor of Mykoliav Vitaliy Kim on October 19 announced that the Ukrainian forces in the locality lowered 13 UAV Shahed-136 of Russia, of which the air defense units of the Southern Command of the Southern Lowering 11 units and the National Guard were together together.

Russia has started using the UAV suicide to attack the target of Ukraine since September. Some Western experts think that Russia uses suicide UAV in Ukraine to improve the accurate long -range attack capacity in the context that the country is exhausted.

The Russian forces recently increased the use of unmanned aircraft (UAV) to commit suicide, causing the Ukrainian army to deal with.