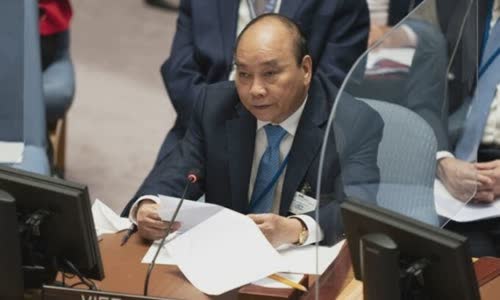 This trip has a lot of profitable meaning, achieving all objectives and provides comprehensive, comprehensive results, contributing to continuing to improve the prestige and position of Vietnam in the international arena, Ministry

President Nguyen Xuan Phuc spoke at the senior discussion of the United Nations Security Council for Climate Change in New York, the United States on September 23.

The visit to Cuba of President Nguyen Xuan Phuc has created a new bio-flow that promotes friendly relations and cooperation between the two countries, Minister Bui Thanh Son emphasized.

Although domestic vaccines are not enough for all people, Cuba is committed to providing 10 million doses of abdala vaccines and transferring production technology for Vietnam, immediate delivery of a million doses during a visit.

Speaking at senior sessions of the General Assembly and the United Nations Security Council and many other discussions, President Nguyen Xuan Phuc continued to affirm Vietnam that Vietnam is always responsible and positive

For more than three days in New York, the President met more than 30 heads, leaders of major international and international organizations such as the United Nations, World Bank (WB), International Monetary Fund (IMF)

The work trip also enlisted with support from the international community for Vietnam, especially in the efforts to prevent Covid-19 epidemic and recover, develop after translation.