The Russians insecure after the car bombing in Moscow

Many Russian commentators supported the military campaign in Ukraine bewildered, after the car bombing that killed Dugin's daughter Dugin.

Margarita Simonyan, Editor -in -chief of the Russian Television Network RT, last weekend walking in the park in Moscow when her bodyguard suddenly rushed forward, checking a ball left on the bench. 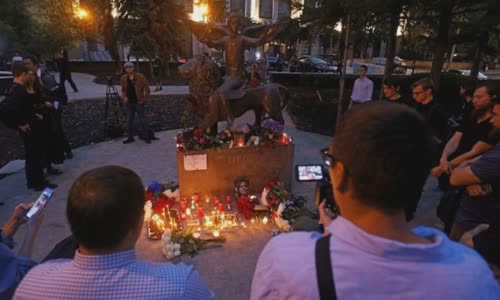 If I want to assassinate her, I will do that, just put a ball containing the bomb along the way she goes, the bodyguard told Simonyan, the supporter of the Russian military campaign in Ukraine.

People placed Darya Dyna's flowers and candles in Moscow, Russia, on August 22 after the car bombing that killed her.

A few hours after the walk in Simonyan's park, Darya Dugina, a journalist with a tough view and supported Kremlin, killed when the car she drove exploded on the highway on the outskirts of Moscow by Do Do

Dugina is the daughter of Alexander Dugin, a famous political commentator and a Western media as the ideological brain of the Kremlin, which has a great influence on Russian President Vladimir Putin.

The Russian state television describes the bombing as a terrorist act and said the target that the attackers wanted to target was Dugin, because he changed the car for his daughter at the last minute.

The Russian Homeland Security Agency (FSB) on August 22 accused Ukraine behind the incident, saying that a Ukrainian woman and her 12 -year -old daughter entered Russia to implement a bomb plan, then escape.

Amidst the controversy and speculation, the murder of Dugina shocked the scholars and commentators who supported the Kremlin, who actively spoke out to defend Russia's military campaign in Ukraine.

The attack immediately bombarded the feeling of insecurity, anxiety, skepticism among the most enthusiastic supporters of the Kremlin.

Normal Russians suddenly felt the heat from the conflict that they thought before.

The image of the car carrying Dugina burning violently on Russian social networks just a few days after the video of the explosions consecutively took place at the Russian military facility in the Crimea peninsula, causing visitors to rush away from selling.

In this context, the insecurity made some of the most prominent allies of President Putin strengthen the bodyguard team and other security measures against invisible threats, unpredictable.

Everyone now understood that there was no safe place, the Kremlin Yury Kotenok reporter wrote on Twitter, adding that the Russians could no longer ignore the conflict.

Simonyan, who has recently called on the authorities to perform more drastic raids in Ukraine to respond to attacks in Crimea, on August 21, wrote on the Telegram that she now did not leave home without leaving home without

Simonyan said that before Dugina was murdered, she thought that the guardians with the ball were really ridiculous.

Simonyan said that she hired a security guards 24/7 since April, when FSB announced that they had broken the conspiracy against Vladimir Solovyov, a famous commentator who supported electricity Kremlin.

The bombing affects the belief of peace and stability in Russia, in the context of the country has not won the decisive victory on the battlefield of Ukraine.

The Kremlin Semyon Pegov, who owns the WARGONZO channel on the telegram with more than one million followers, on August 21, the Russian -Ukrainian conflict warning will last because it is changing the nature of history.

Right now, we should be aware of both the mind and heart that how serious this is to all of us, he wrote in a series of articles about Dugina murder.

While the question of who behind the Dyno assassination was still controversial, a series of voice support for electricity Kremlin warned her death would cause more extensive consequences.

Analyst Tatiana Stanovaya, the founder of R. Politik consulting organization, said that the bombing could increase the pressure to force President Putin to respond with a tougher policy for the conflict in Ukraine.

If Putin did not take drastic actions, his tough image could be weakened in Russian public opinion, Stanovaya wrote.