US House of Representatives Nancy Pelosi met Taiwanese English leader in Taipei today, announcing the US did not give up its commitment to the island.

The video was broadcast live on the Facebook account of Taiwanese leader Thai Anh Van showing that Ms. Thai received US House of Representatives Nancy Pelosi at the office and awarded the Honorary Medal to Ms. Pelosi. 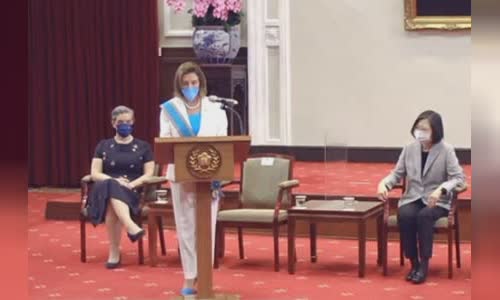 Faced with intentional military threats, Taiwan will not back down.

Ms. Thai thanked Ms. Pelosi for her steadfast support in the international arena.

Today, our delegation came to Taiwan to clearly assert that we would not give up its commitment to Taiwan and we are proud of our long -term friendship, Pelosi.

During the previous Taiwanese legislative agency, Pelosi said that her delegation came to Taiwan to bring peace to the area.

The US House of Representatives on August 2 arrived in Taiwan, despite the harsh warnings from Beijing during the previous days.

Although President Joe Biden's administration is said to have opposed this visit to Taiwan, the White House National Security Council John Kirby said Pelosi had the right to go to places she wanted.

The Chinese military said the country was on a high alarm and is willing to start a series of military actions targeted to respond to the visit.

China also summoned the US ambassador to Beijing Nicholas Burns to criticize Pelosi's visit to Taiwan.