Lithuanian soldiers were carefully camouflaged, bombarded and flanked by American armored troops, causing them to fail in their exercises, despite outperforming their forces.

Lithuania's 21st Motorized Infantry Battalion defeated American soldiers and made them "ambush" in a simulated ambush taking place in the snowy forest of Kairai, right next to the Baltic coast on February 21.

Lithuanian soldiers join the ambush of American soldiers in a forest on February 21 Photo: US Army

"The ambush was perfect. They hid carefully, we could not spot them even above their heads," Corporal Joseph Salamon, spokesman for the US Army 2nd Battalion, said in

Captain Evan Ringel, commander of the US 2-8 company, explained that although there were fewer tanks and troops than the attacking force, the Lithuanian 21 Dragoon battalion knew how to make use of everything it had.

"This training course specializes in combat with anti-tank technology," Lieutenant Eimantas Maslauskas, of the Lithuanian Volunteer Force, said before launching the ambush.

Maslauskas and soldiers installed mines in many places, then deployed forces carrying grenade launchers to hide at main points along a distance of about three kilometers running through the forest.

As the US armored vehicle entered the path through the woods, a Bradley was hit by a mine buried under snow and tree branches. 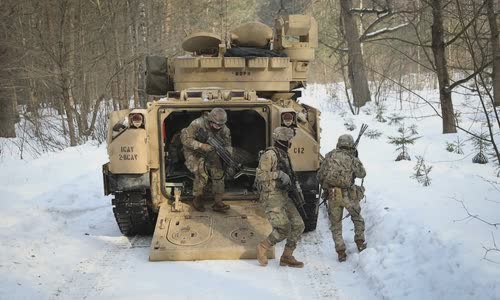 American soldiers left the Bradley armor to deal with Lithuanian soldiers during the rehearsal, on February 21 Photo: US Army

"If this was a real ambush, we would have suffered many casualties," Captain Ringel said.

For the Lithuanian soldiers, the ambush proves the effectiveness of the training, while the American soldiers receive a profound lesson about ambush tactics to prepare for future response.

"We are very happy, you see we are smiling," Maslauskas said.

Lithuania is not the only country where the US military exercises together.

Over the years, the US has doubled down on cooperation with the Baltic states like Lithuania because they are located between Russia, its rival, and the North Atlantic region.