The donut dolls of American soldiers during World War II

The main task of the Donut Dollies volunteer group is only making donuts for American soldiers on the battlefield, but the requirements for them are quite harsh.

After the Japanese raid on December 7, 1941, on Pearl Harbor, the American Red Cross quickly mobilized resources to supply the wounded. 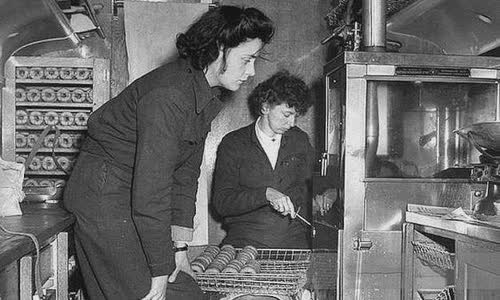 In fact, women wartime volunteers, who "both bake and run bombs", have been around since 1917. However, their activities during World War I were unorganized and not regular.

Experts say the standards of these female volunteers are even higher than those of the military.

After joining the Donut Dollies group, the vaccinated female volunteers, given Red Cross uniforms, underwent several weeks of basic training in the history, policies, and regulations of both the Red Cross and

After completing the training, the Donut Dollies members are sent abroad, where they often run a "mobile club".

"Everyone spent a whole day baking the other day," said Clara Schannep Jensen, a Donut Dollies volunteer, in her letter to her family, adding that she was being treated quite well.

Finally, the Red Cross was forced to open several bakeries to stockpile cakes for "mobile clubs".

"I'm doing a pretty responsible job and feel good when they judge I can handle it," Jensen wrote in another letter to his family.

In addition to donuts, the green buses also included cigarettes, chewing gum, magazines and newspapers, adding a sense of belonging to the homesick soldiers.

Even when feeling tired, the female volunteers are still ready to bring smiles to the soldiers.

However, Christie admits there are still downsides.

Many people argue that the female volunteers of Donut Dollies deserve the same credit as the military.

Long before the concept of post-traumatic stress disorder (PTSD) was widely accepted, female volunteers accompanied, listened, tried to understand and support soldiers on the battlefield.