After Russia rained the rocket to Ukraine, the question of what to do to the West was to do to increase support for Kiev to deal with the escalating move of Moscow.

In less than a month, the fighting in Ukraine suddenly moved from the persistent war battle posture, expected to last over the winter, to a multi -level conflict, escalate quickly, challenges 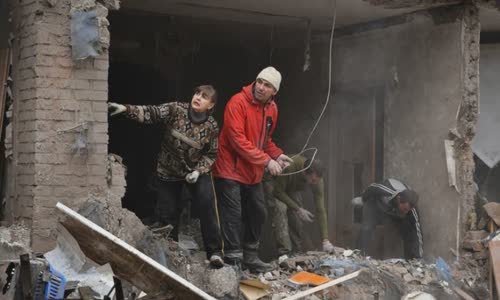 The Russian military on October 10 launched a large -scale attack with missiles into a series of Ukraine cities, including Kiev capital, places far away from the front line.

People walked out of a damaged building after the Russian raid in Sloviansk, Donetsk, eastern Ukraine, on October 10.

According to experts, the raid has changed the nature and pace of the Russian - Ukrainian conflict in recent weeks, asking whether the US and other Western allies should intervene more to help to help.

Viktor Bondarev, head of the Russian Senate Foreign Affairs Committee, wrote on Instagram that the attack was only the beginning of a new period in Russia's military campaign in Ukraine, with more resolute actions will be

The Vice Chairman of the Russian Security Council Dmitry Medvedev also warned that the missile ambush in Ukraine was just the beginning and warning of the next attacks.

Up to now, the effort to provide weapons for Ukraine has always been carefully considered by the US and allies, in order to comply with the highest priority is to avoid a direct clash between Russia and the West.

American officials are still cautious about the possibility of them making a more assertive move for Russia on the battlefield of Ukraine.

The turning points in conflict are often dangerous changes.

The Russian missile raid is clearly a sign of such a turning point, observers.

Despite receiving many aid weapons from the West, Kiev still thought that they had not reached their hands in time.

Despite the harsh condemnation of Russia's actions as well as the commitment to maintain Ukraine, it is unclear how American and European leaders can accelerate the transfer speed.

During the phone conversation with his Ukrainian counterpart Volodymyr Zelensky on October 10, President Biden pledged to continue providing Ukraine necessary to defend himself, including advanced air defense complexes, but not mentioned spending spending.

A US defense official said yesterday that they would reach Ukraine in the next few weeks, when the system was ready and the training process was completed.

However, the official said 6 other Nasams systems could take several years to complete and transfer.

Even before the Russian missile raid, the leading Ukrainian officials have continuously emphasized that they need to be strengthened to the air defense net, which has been significantly reduced after more than 7 months of conflict.

Ukrainian Foreign Minister Dmytro Kuleba wrote on Twitter on October 9 that it needs to urgently emergency air defense and missile defense systems, calling for partners to speed up weapons transfer. 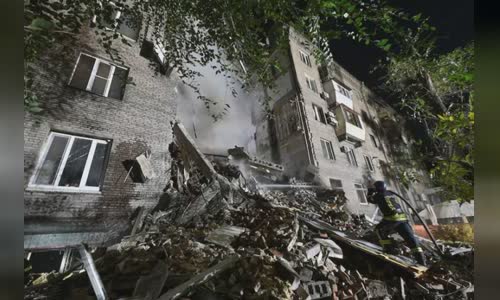 A building was severely damaged by Russian missile raids in Zaporizhzhia, southeast of Ukraine, October 10.

The latest Russian attack and warning the military action of senior officials showed that Ukraine had a reason for such a call.

The German Ministry of Defense on October 10 announced the first combination of the four Iris-T air defense systems that Berlin promised to support Kiev in the next few days.

Germany reinforced Ukraine some modern weapons, including Gepard self -propelled air defense artillery, but did not meet the expectations of Kiev and Washington.

During the phone conversation with President Zelensky, President Macron pledged to enhance support for Ukraine, including more military devices.

The recent report of the Kiel World Economic Institute showed that in the effort to transfer weapons to Ukraine, France spent less than smaller countries in Europe such as Estonia or Czech Republic.

France only ranked 11th in the ranking of military aid providers for Ukraine in August, the result is considered not commensurate with the country claiming to be the leading military power for the European Union (EU).

Ukraine is interested in the air defense systems used by the French military, including the SAMP/T system.

French government officials denied that the country was not large enough for Ukraine, explaining that there were unpublished supports.

But criticisms that France lag behind to smaller allies in the effort to support Ukraine seemed to make Elysee's electricity feel bothered.

The fund added about US $ 230 million that France has committed to military aid to Ukraine, but far inferior to more than 17 billion USD that the Biden government has transferred to Kiev since February.

Not only Germany or France, other European powers are also facing the problem of heavy weapons aid to Ukraine.

After nearly 8 months of supporting Ukraine, the arsenal of European countries was almost exhausted.

Giving up this weapon is probably not a difficult decision for European countries to support Ukraine, according to VOX, but the transfer of new generation modern weapons is another story.

Speeding up the promised device transfer speed is essential to protect Ukraine, she emphasized.