The Russian government in four regions in Ukraine announced that more than 50% of eligible voters had voted for Russia's merger. 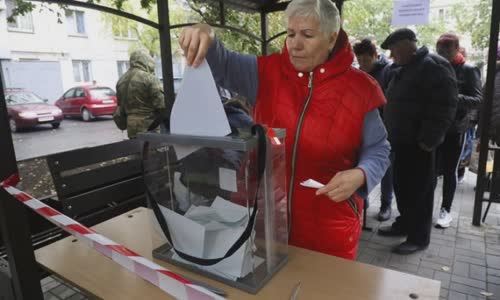 Galina Katyshenko, leader of the Zaporizhia Election Committee, said the number of voters voted in this area was 51.55%.

The vote of referendum on the merger of Russia in Lugansk, Donetsk, Zaporizhia and Kherson will be held until September 27.

People voted for a referendum to merge into Russia in Donetsk, Ukraine, on September 23.

The Russian Central Election Commission (CEC) said more than 100 international observers from 40 countries participating in monitoring of referendums in 4 territories in Ukraine.

The Ukrainian government and Western countries criticized these as staging referendums and confirmed that they would not recognize the results.

More than 8 years ago, the Crimea peninsula on March 16, 2014 held a referendum and then announced 97% of voters agreed to separate from Ukraine to merge Russia.

Promoting the plan of referendum to merge four Ukrainian areas into Russia could be the basis for Moscow to escalate military action with Kiev.

When the pressure on the battlefield and the socio -economic front surrounded, Putin chose to escalate tensions to achieve the set goals.